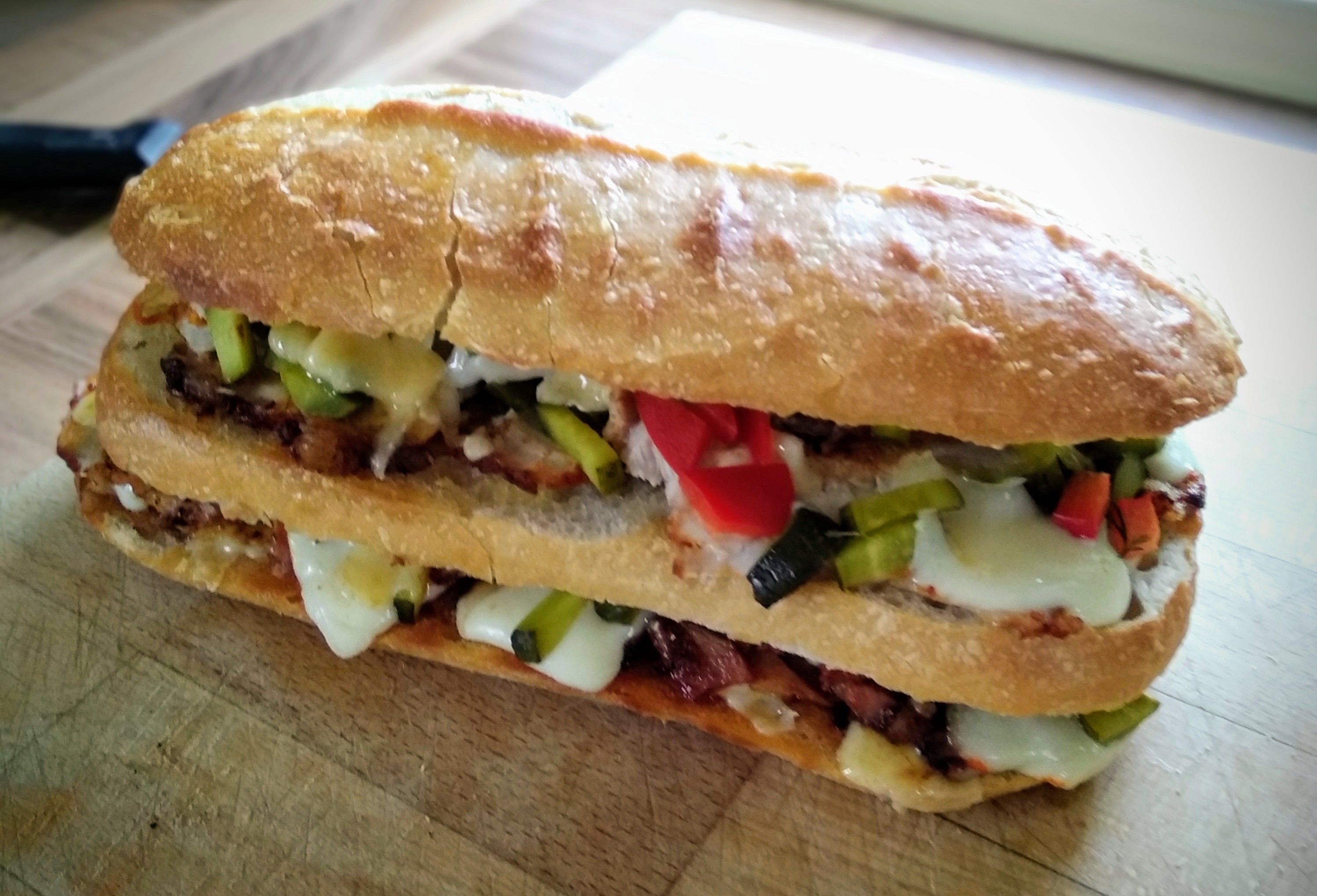 Prep time: 15 minutes plus time for the meat to marinade

Given the strange and unsettling times we find ourselves in, it’s a great time to stay home and try something new.  While on lock down from work for a few days I finally had time to get back to blogging. Who would have thought a one year old could keep you so busy?

I first heard of these beasty sandwiches thanks to the movie Chef, it’s a great film about about a chef rediscovering his passion for flavour and cooking. With the food skills and recipes in the movie coming from Roy Choi, the food looks fantastic and leaves you hungry. The movie made these sandwiches look simply amazing and after reading a few recipes I decided to have a go. With a combination of citrusy & garlicy pork, pickles, mustard and gooey cheese I can’t see too much room to go wrong.

2 sour dough bloomers – any good quality bread but really you need something with some chew to it. Ciabatta would probably work nicely.
Salted butter – melted
Gherkins
Red peppers
Mild american mustard
Fresh dill
Cheese – I used a mix of port salut and mature cheddar for a mix of melty goo and sharp flavour. Mozzarella will give a lovely stringy bite to the sandwich.
I’ve deliberately left out quantities for the sandwich ingredients as really it comes down to personal preference. I would simply suggest putting in lots of everything.

For the pork marinade finely zest then juice the lemons and limes and mix the zest into the juice along with the sugar, salt, pepper and chipotle paste. Remove the skin from the pork and score the meat with deep slashes on all sides to really let the marinade in.
Let it sit in the marinade in the fridge for at least 2 hours or overnight preferably.

When ready to start cooking preheat your oven to 180°C and place your pork in a roasting tray and pour over the marinade.
Roast the pork for about 40 minutes and flip it over and give it another 35 minutes. Pull it out and let it rest. 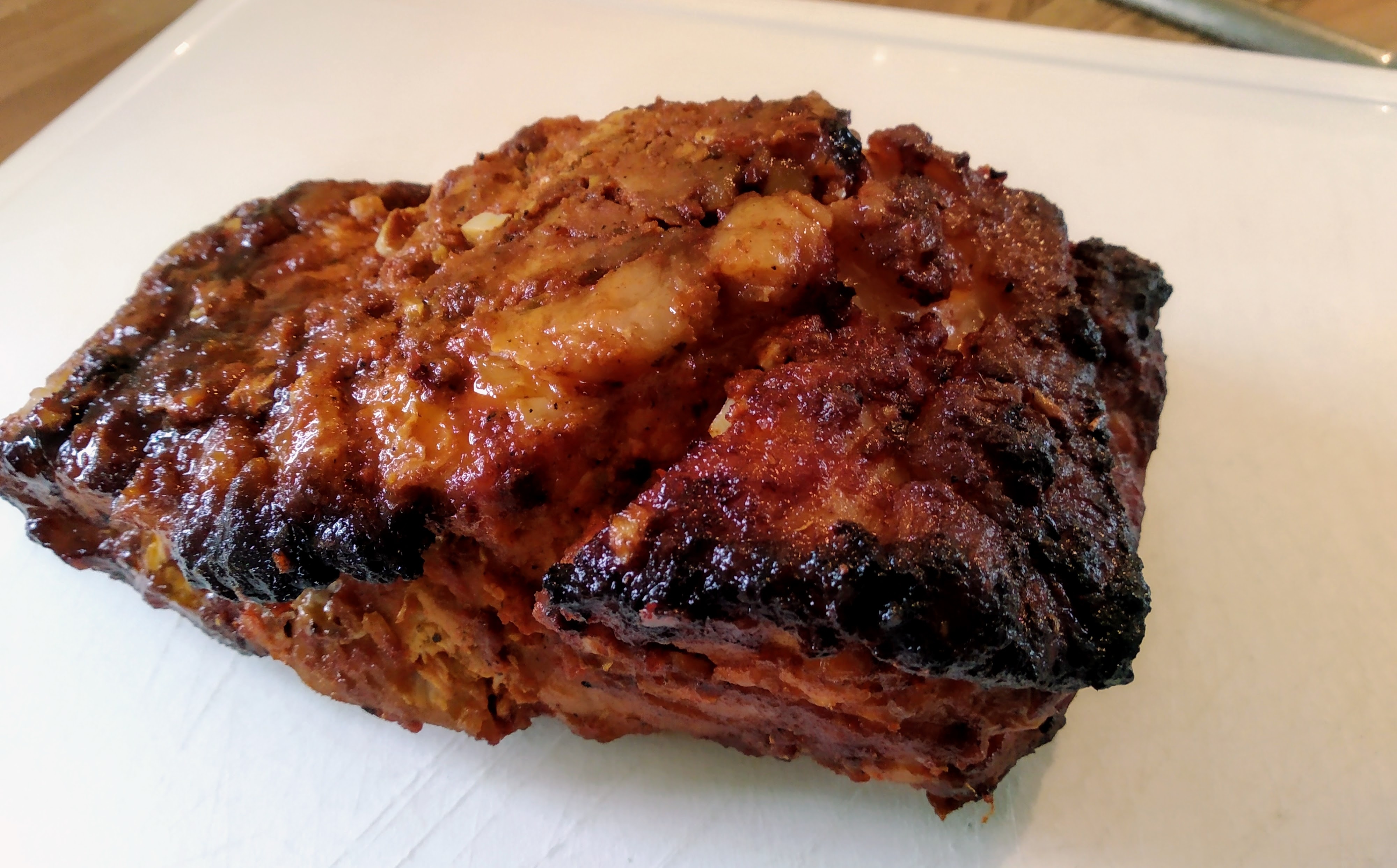 Get a grill pan on over a medium high heat and lower your oven to 150°C.
Slice your bloomer loaves down the length to make a triple deck sandwich. 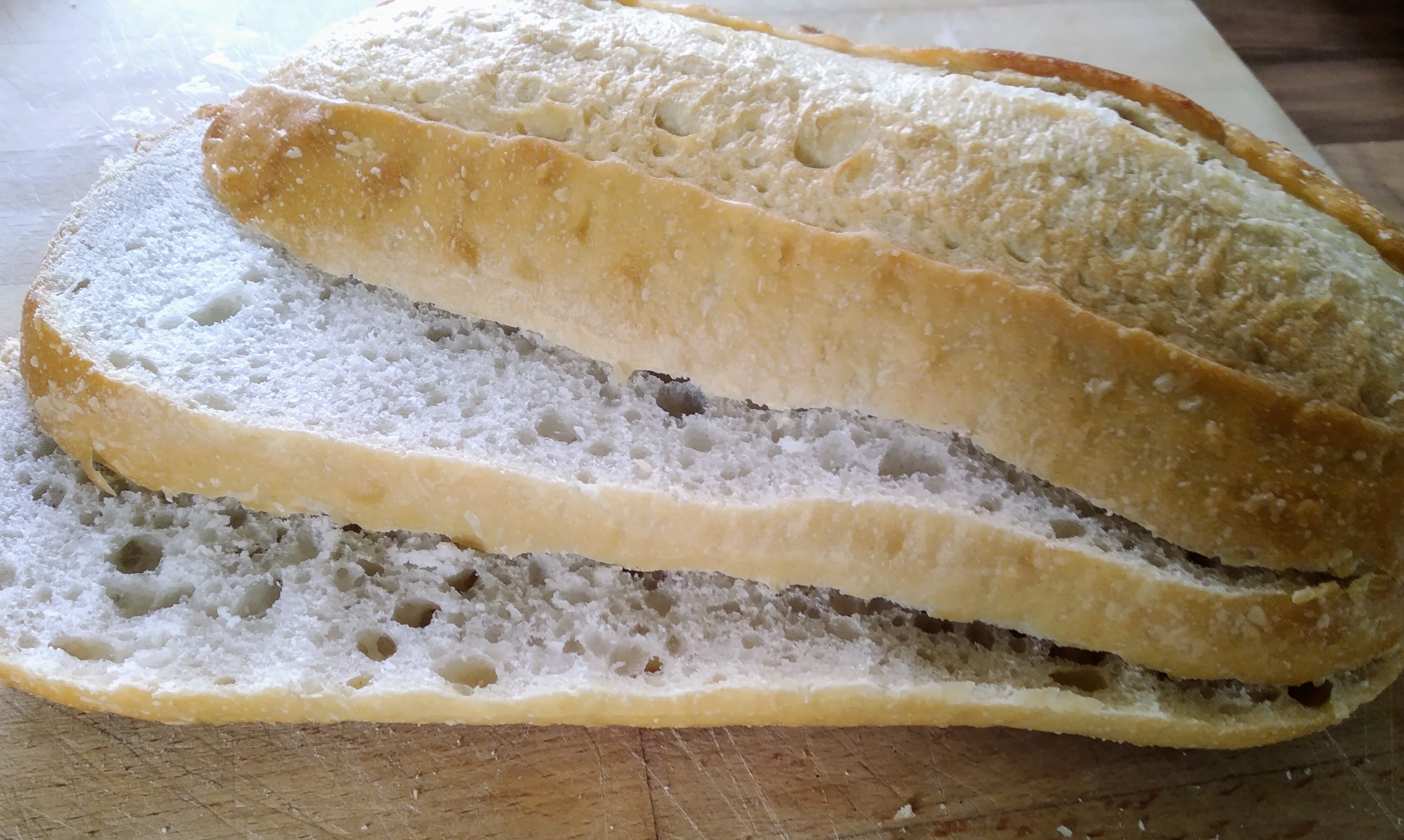 Brush the cut surfaces with melted butter and grill until golden.

Time to slice the meat and start assembling your sandwich.
Spread the american mustard on the toasted bread. 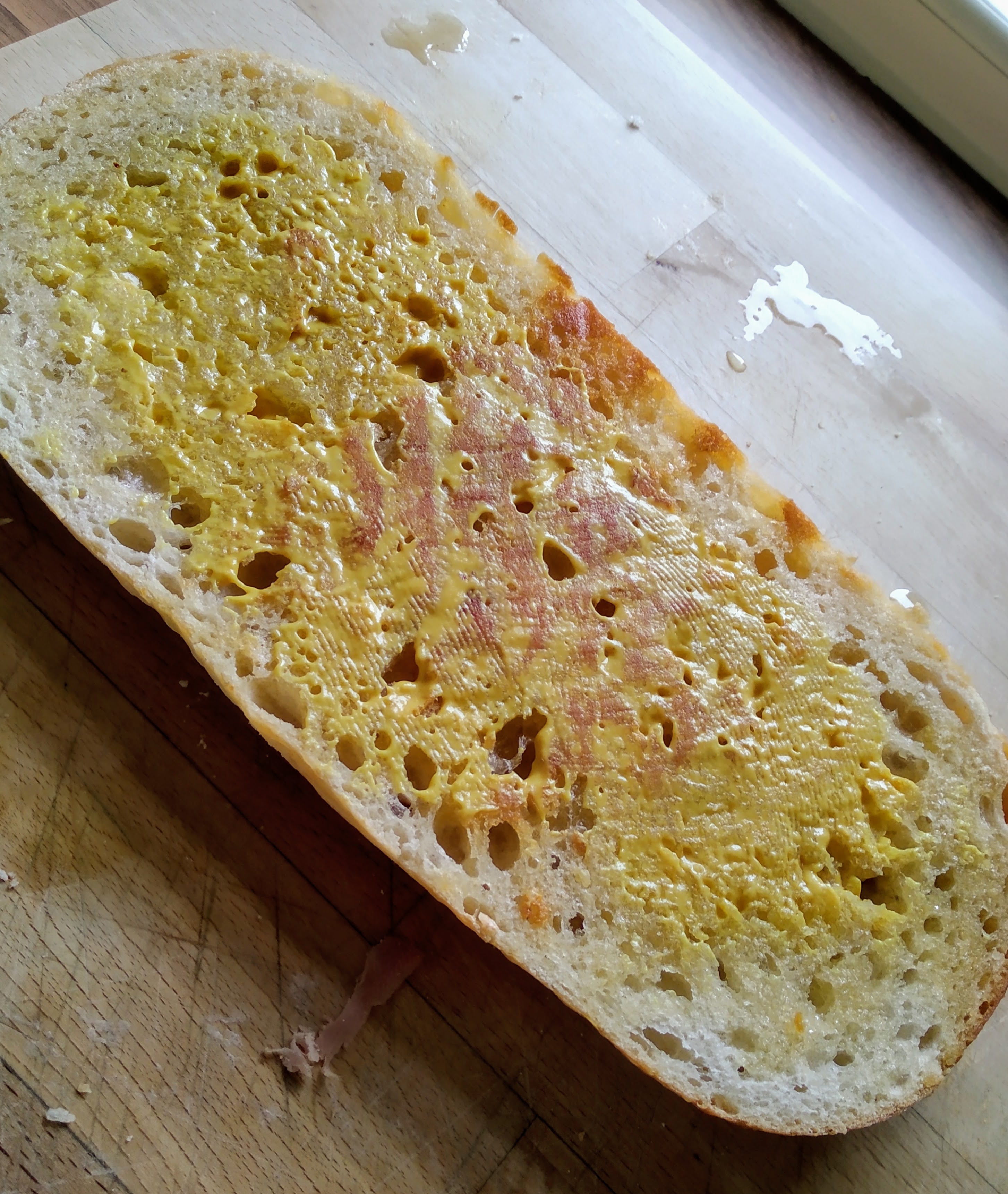 Now layer on the sliced pork. If you really want to intensify the flavour toss the sliced meat in the juices/marinade left in the roasting tin. Top the sliced meat with torn/sliced/crumbled/grated cheese and then the next slice of toasted bread.

Repeat the mustard, meat and cheese and then top all this off with diced gherkins, peppers and chopped dill. Put the whole thing on a baking tray and then into the oven for about 10 minutes until the cheese has melted. 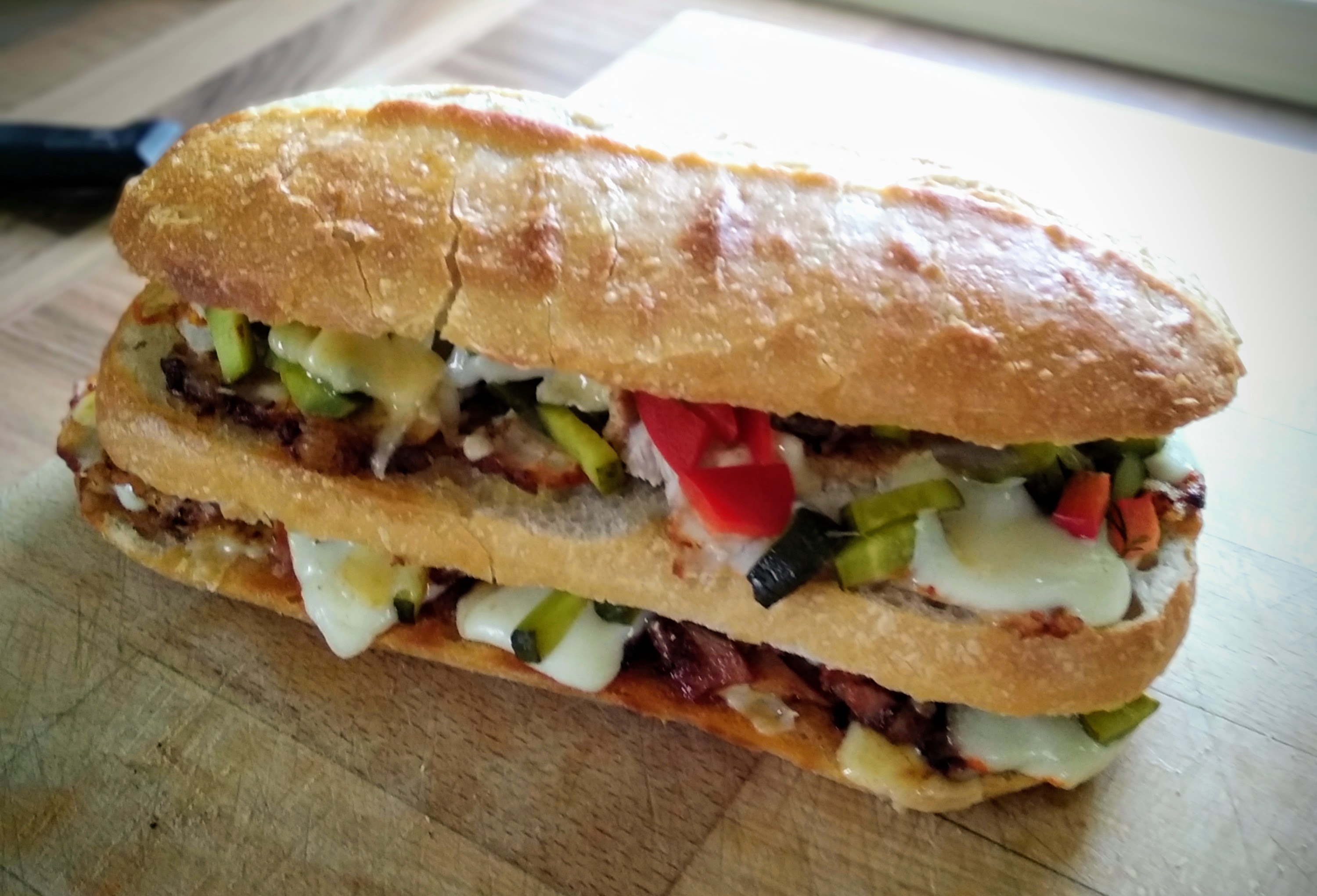 Try swapping half the pork out and shaving some smoked ham and then tossing it in the roasting juices. You could probably make it veggie by rubbing some smoked tofu in the marinade and giving it a quick bbq or roast.